WHAT IS A NANOPARTICLE?

It falls in the general category of polymeric nanoparticles, which are uniform spherical nanostructures made of synthetic polymers. In this case, it is the linear copolymer poly(d,l-lactic-co-glycolic acid), usually referred to as PLGA. However less common, other polymers as poly(ε-caprolactone) or PCL; poly(ethylene glycol) or PEG, polyethyleneimine or PEI and poly(lactic acid) or PLA can be used as well.

The PLGA copolymer is synthesized via random ring-opening copolymerization of the two monomers lactic acid and glycolic acid by ester linkages. Different ratios of glycolic acid to lactic acid can be found (identified with the molar ratio) the most common are 50:50 and 75:25 lactic acid to glycolic acid. This is a determining factor in the final properties of the nanoparticle. On one side, lactic acid has a methyl group which makes it more hydrophobic (thus, it degrades slowly) and stiff. On the other side, glycolic acid is more hydrophilic (degrades faster) and is more flexible. The amount of each will determine the hydrophobicity of the polymer, the rate of degradation (that could go from months to years) and its amorphous structure. The poly(d,l-lactic-co-glycolic acid) polymer can be terminated in a carboxyl group (not end capped) or in an alkyl ester which protects against quick degradation.

Polymeric nanoparticles can be classified in two categories according to their morphology: nanocapsules and nanospheres. Nanocapsules contain an oily or aqueous core surrounded by a polymeric layer. On the contrary, nanospheres, consist of a solid continuous polymeric matrix. In either case, the drug is can be dissolved in the core (nanocapsules) or the polymeric network (nanospheres), or it can be adsorbed onto the nanoparticle surface.

PLGA nanoparticles are synthesized by emulsion-solvent evaporation methods. This is, preparing a single oil-in-water (o/w) emulsion for hydrophobic substances or double water-in-oil-in-water (w/o/w) emulsion for hydrophilic compounds. The emulsification is done using stirring or homogenization, emulsifiers and controlling the temperature which forms the nanoparticles. After that, the solvent is removed via evaporation or extraction and the PLGA drug-containing nanoparticles harden and can be collected.

WHAT IS A PLGA NANOPARTICLE DELIVERY SYSTEM?

Polymeric nanoparticles are excellent in vivo nanocarriers due to their biocompatibility (approved by the FDA) and their special suitability for oral administration of pharmaceuticals. They are made of biodegradable and biocompatible polymers or copolymers with a size in the range of nanometers, like PLGA – Poly (lactic-co-glycolic acid). Drugs can be encapsulated within the carrier, physically adsorbed onto, or chemically linked to the surface.

The PLGA copolymer is naturally degraded by hydrolysis under biological and environmental conditions to lactic acid and glycolic acid, which are natural metabolic by-products. Then, they are cleared via the renal system.

Another challenge faced in the pharmaceutical industry is the degradation of the drug compound under light, pH or oxidative conditions. PLGA nanoparticles help maintaining the therapeutic activity and molecular integrity of the susceptible pharmaceuticals.

There are many protocols to prepare the polymeric nanoparticles which enable the loading of drugs with different polarities. Both hydrophobic and hydrosoluble drugs will be trapped in the polymeric matrix during the synthesis process and will be released in a controlled way.

Bare PLGA nanoparticles are rarely used due their high hydrophobicity, short circulation times due to opsonization and low cellular uptake due to surface negative charge. Surface coatings with PEG or PEI are essential to ensure that the nanoparticles reach their target. 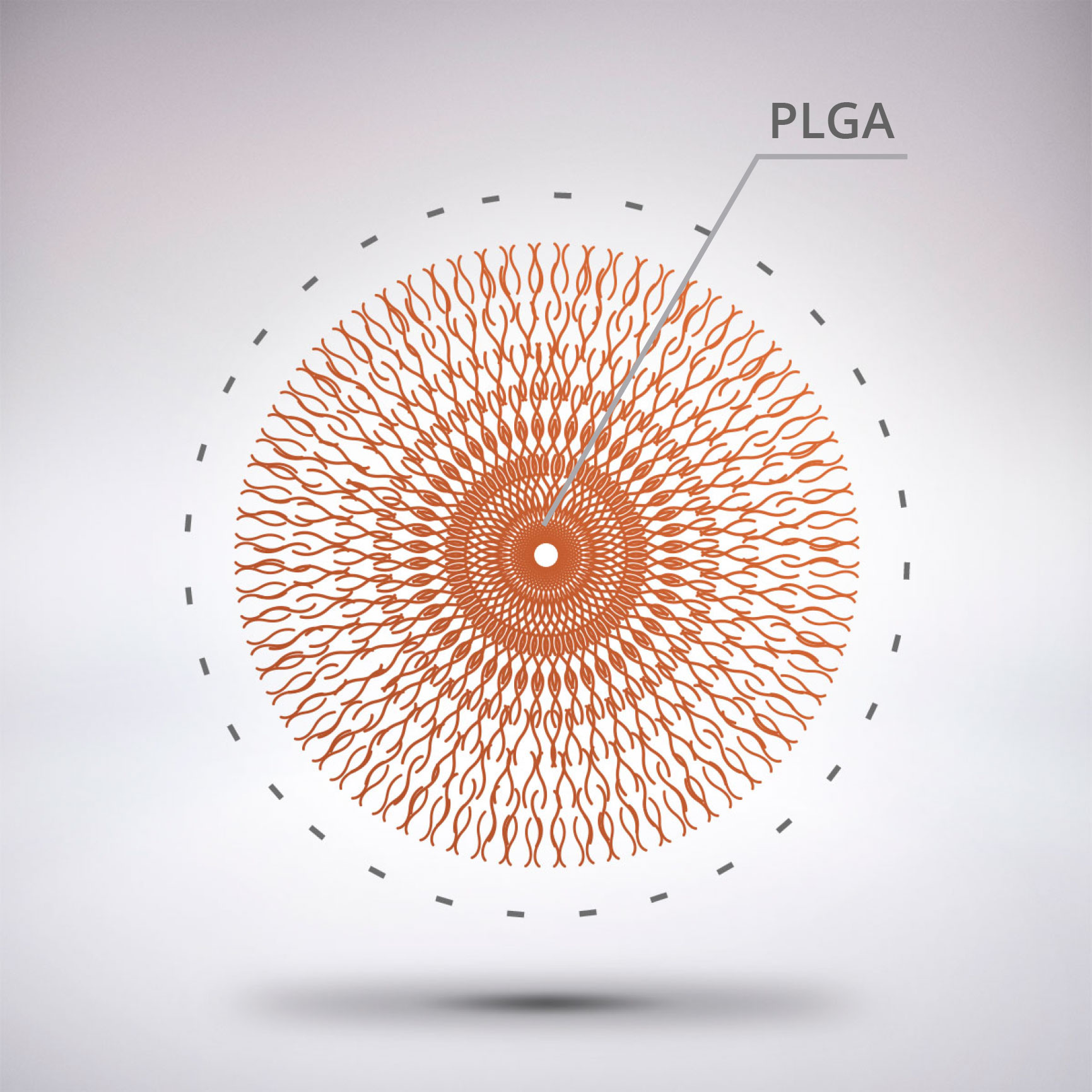 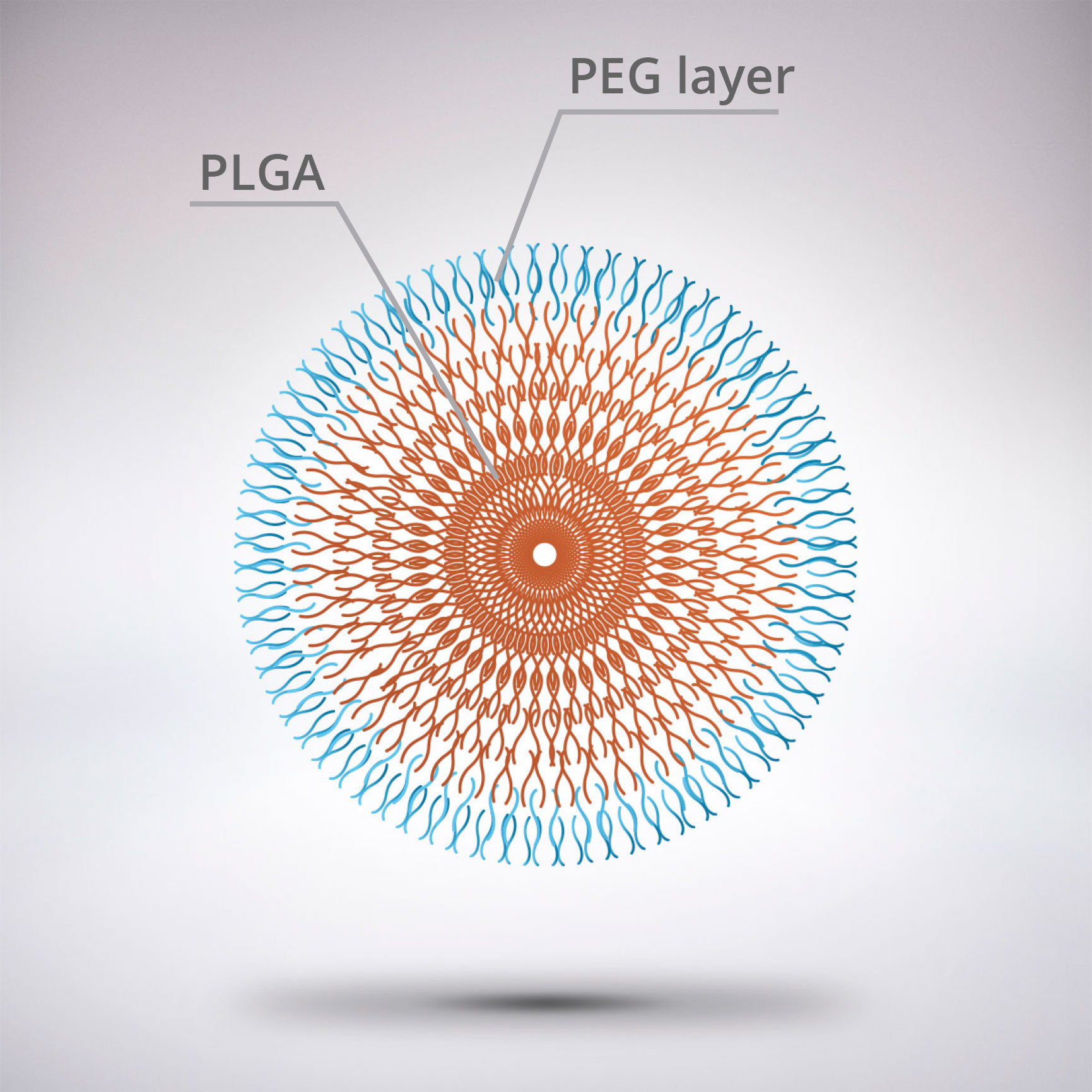 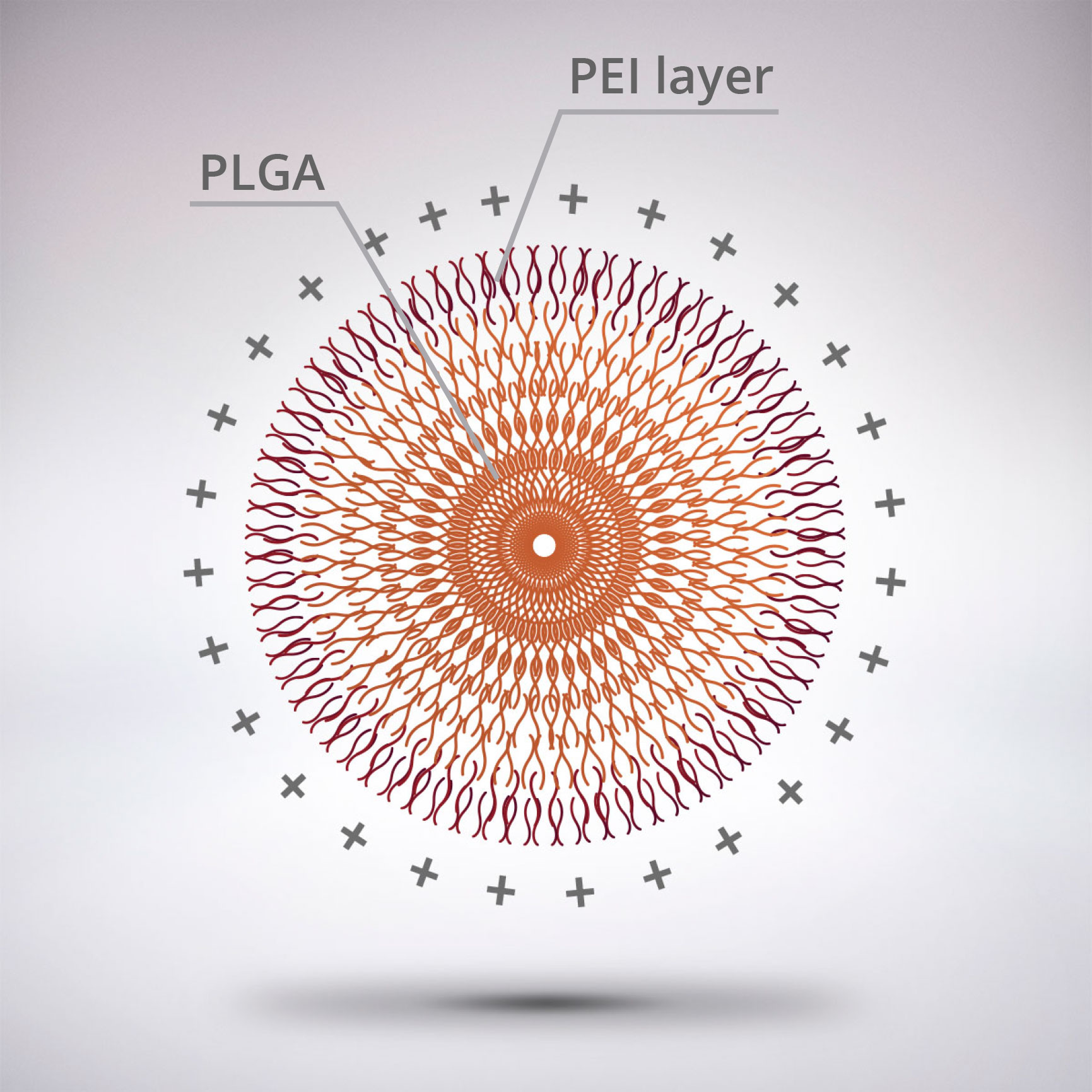 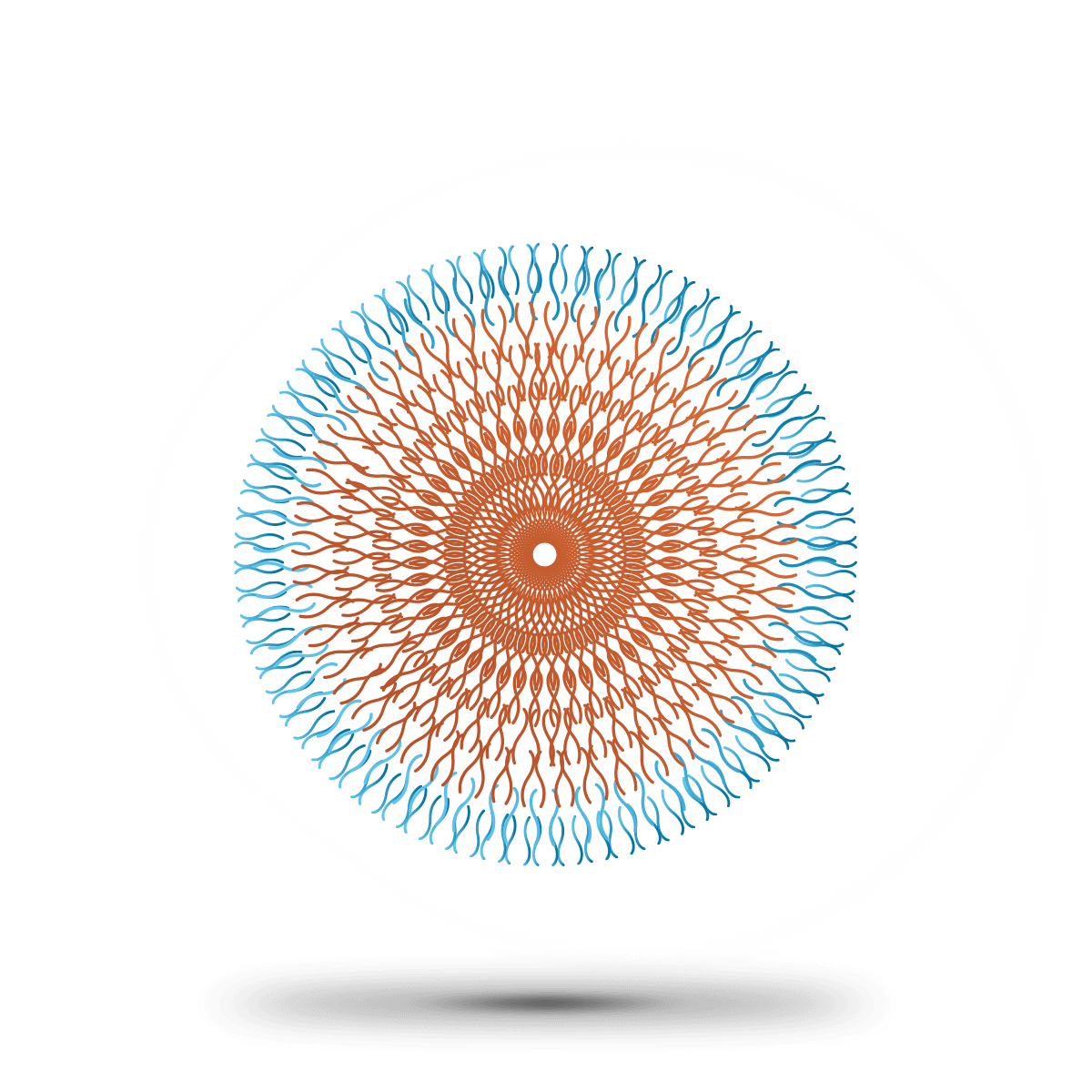 Poly(ethylene glycol) or PEG is the most common polymer used in combination with PLGA nanoparticles. It helps in reducing the nanoparticle aggregation, increasing solubility and stability over time, reducing immunogenicity and uptake from RES cells. All of this contribute to the increase in the circulation time. For these reasons, it is recommended for in vivo applications. While PLGA is naturally hydrophobic, PEG is the opposite, so the combination of both is amphiphilic, facilitating the emulsification process.

PEG-PLGA nanoparticles can be prepared by two methods: using of PLGA-PEG block copolymers or by adding a PEG coating after the preparation of the PLGA nanoparticles. The PEG-PLGA block copolymers are typically double or triple: PEG-PLGA, PEG-PLGA-PEG and PLGA-PEG-PLGA. As with the lactic acid : glycolic acid ratio, the ratio of PEG to PLGA in the in here will provide the molecule with different chemical properties. The higher the ratio (higher PEG content), the lower it is the molecular weight and the more soluble in aqueous media it is. On the contrary, if the ratio is low (higher PLGA content), the higher the molecular weight and the less hydro soluble the molecule is. For the second method, the PEG is linked to the PLGA nanoparticles by amide bonds between an amine terminated PEG derivative and a free carboxyl group of PLGA. 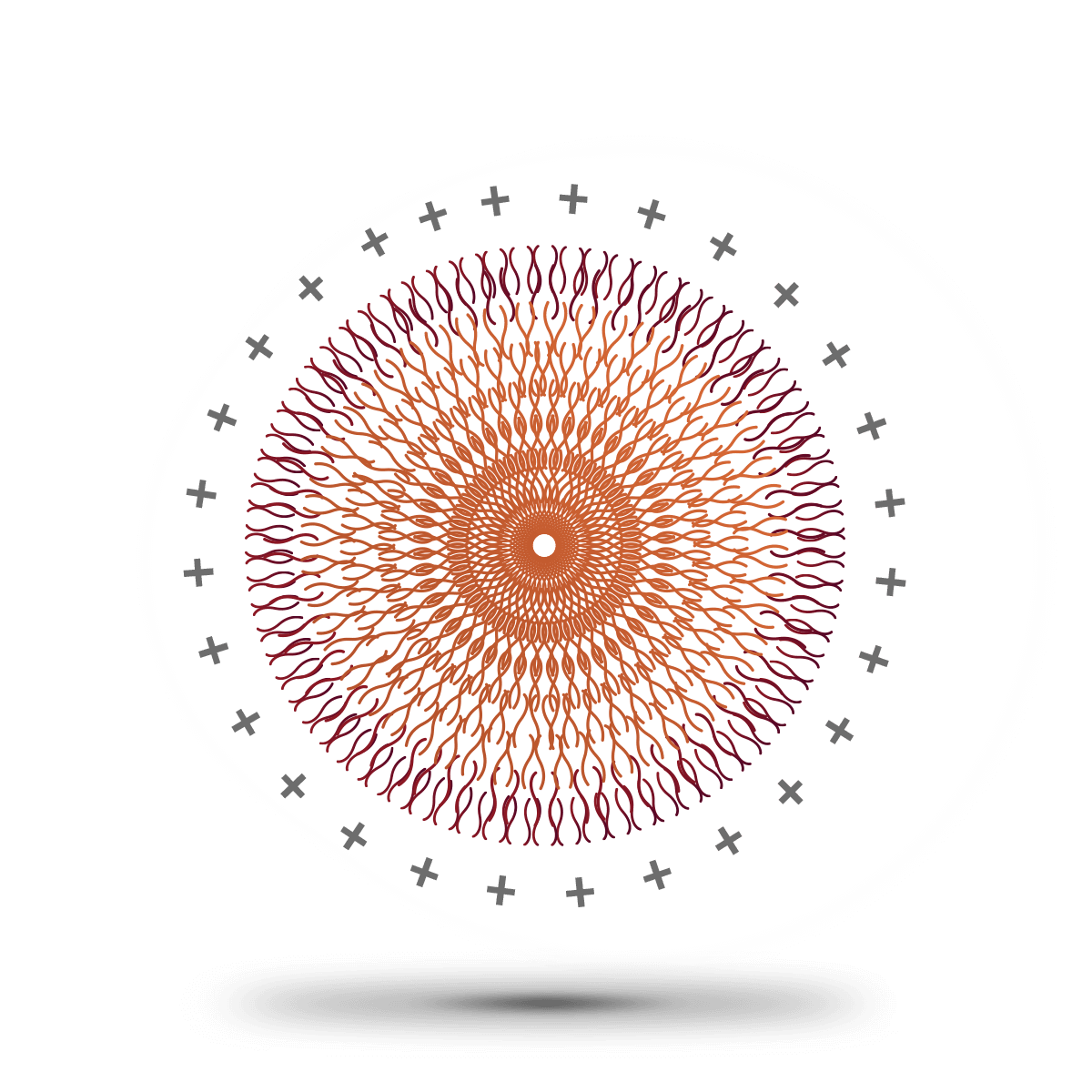 Polyethyleneimine, commonly referred to as PEI is a synthetic hydrosoluble polymer used to coat PLGA nanoparticles and confer them with a positive charge. This property makes PEI-PLGA nanoparticles suitable for the intracellular delivery of genetic material which is negatively charged. It has great affinity for lipopolysaccharides and cell membranes increasing circulation times of the nanoparticles.

PEI consists of the repeated monomer aziridine containing an amine group. PEI is available in a linear and several branched forms, the latest being the most positively charged. The formation of PLGA-PEI is the result of the electrostatic interaction of the amine group from the PEI and the carboxylic acid end from the PLGA.

The most cationic variants condense nucleic acids more and provides them with protection from nucleases. A PEI coating also favours the endosomal scape. Whereas the linear PEI only contains secondary amines, the branched PEI contains primary, secondary, and tertiary amine groups. The firsts are the ones that form the complexes with the nucleic acids, and the others play their role in disrupting the endosomal membrane due to their buffering effect.

Gene therapy: Gene therapy is based on the delivery of genetic material to obtain a therapeutical benefit. However, the delivery of genetic information whether in the form of DNA, RNA or aptamers is not an easy task since they are easily susceptible to degradation and have low cell penetration when used in naked form. By encapsulating them in PLGA nanoparticles, many advantages can be obtained like less toxicity than viral vectors, high loading capacity and the protection from enzymatic degradation. PLGA nanoparticles functionalized encapsulating genetic material as siRNA have been used to treat hyperplasia, atherosclerosis, osteocarcinoma, inflammatory lung disease, to name a few. The DNA/RNA can encode many different therapeutic proteins like TNF-α, p53, transferrin or glycoproteins.

Vaccines: Polymeric nanoparticle-based vaccines for in vivo applications have been developed to carry a wide variety of antigens that will be presented to APCs, mainly dentritic cells. While PLGA microspheres have been object of study for a long time, nanoparticles offer the advantage of navigating more freely through organs and physical barriers due their reduced size. This has proved to be an important factor in the outcome of the therapy since just by modifying the diameter, IFN-γ or IL-4 were produced in response.

All these features together with the biocompatibility and biodegradability of the PLGA, have made possible the use with hepatitis B surface antigen, malaria antigen, yersinia pestis antigen, and HIV. PLGA encapsulating bacteria enzymes have also been used against dental caries through intranasal administration. It has also been used for different administration routes like oral, pulmonary, and subcutaneous. Oral administration is made possible thanks to the high nanoparticle take up from M-cells in the intestine epithelium in just a few hours.

Biosensors: PLGA nanospheres have been used in the development and improvement of hemocompatible biosensors that allow the analysis of whole blood with electrochemical techniques. This is relevant to improve diagnostic methods and control the progress of the therapies.

Cancer therapy: PLGA nanospheres have already been successfully used in vitro and in clinical trials. Results show that drugs encapsulated in PLGA nanoparticles have superior accumulation in the tumor environment, reduced tumor size and enhanced inhibition of cell proliferation. This is thanks to increased cell penetration and reduced toxicity of encapsulated compounds. Because of the higher accumulation in tumoral areas PLGA nanoparticles are also useful for cancer diagnosis and imaging which has a key role in clinical oncology to early detection and accurate prognosis. The greater therapeutic index of encapsulated paclitaxel, cisplatin and mitoxantrone among other chemotherapy drugs over their equivalent clinical counterparts has been proved multiple times.

Tissue engineering: The delivery of growth factors in PLGA nanocarriers is of great interest to promote the thrive of engineered tissues. It facilitates the interactions between the scaffold and the vascular cells as well as induction of cell proliferation and differentiation. They have been used to load growth factors like TGF-β (BMP-2) and VEGF. PLGA encapsulating IL-2/TFG-β microspheres have also proved effective for the differentiation of T cells into regulatory T cells. Some studies have also shown that even without growth factor encapsulation, specific functionalizations of PLGA nanoparticles ultimately lead to the induction of cells to produce the growth factors themselves.

Ocular drug delivery: PLGA nanoparticles are very well suited for ocular drug delivery since they are able to protect the drug from rapid degradation and provide sustained release. They have been used for the treatment of inflammatory diseases like ocular edema and uveitis by encapsulating anti-inflammatory drugs like pranoprofen and fluocinolone via topical installation targeting the cornea. Other studies show that transport to the retina can be directed with PLGA nanospheres. In the case of pranoprofen PLGA nanoparticles, they showed four times more corneal permeation and higher retention time than its free form. Regardless, chitosan coating of PLGA nanoparticles is normally used for ocular delivery applications to enhance the mucoadhesive properties of these carriers.

Brain drug delivery: Crossing the blood brain barrier remains the main challenge to the treatment central nervous system diseases including Alzheimer’s disease (AD), Parkinson’s disease, Huntington’s disease, schizophrenia, and brain tumors. Modified PLGA nanoparticles have been proved to be a successful approach for the brain drug delivery of multiple drugs in in vitro and in vivo studies. To name some: curcumin, estradiol, doxorubicin, loperamide, docetaxel or coumarin-6. Adding a coating and specific ligand is an essential strategy to target the brain tissue which ensures the safety of PLGA nanoparticles for applications other than this one. Using PLGA nanoparticles increases the cell uptake, the therapeutic efficiency and decreased the cell viability in the case of glioma cells.

WHAT KIND OF DRUGS MAY BE DELIVERED BY PLGA NANOPARTICLES? 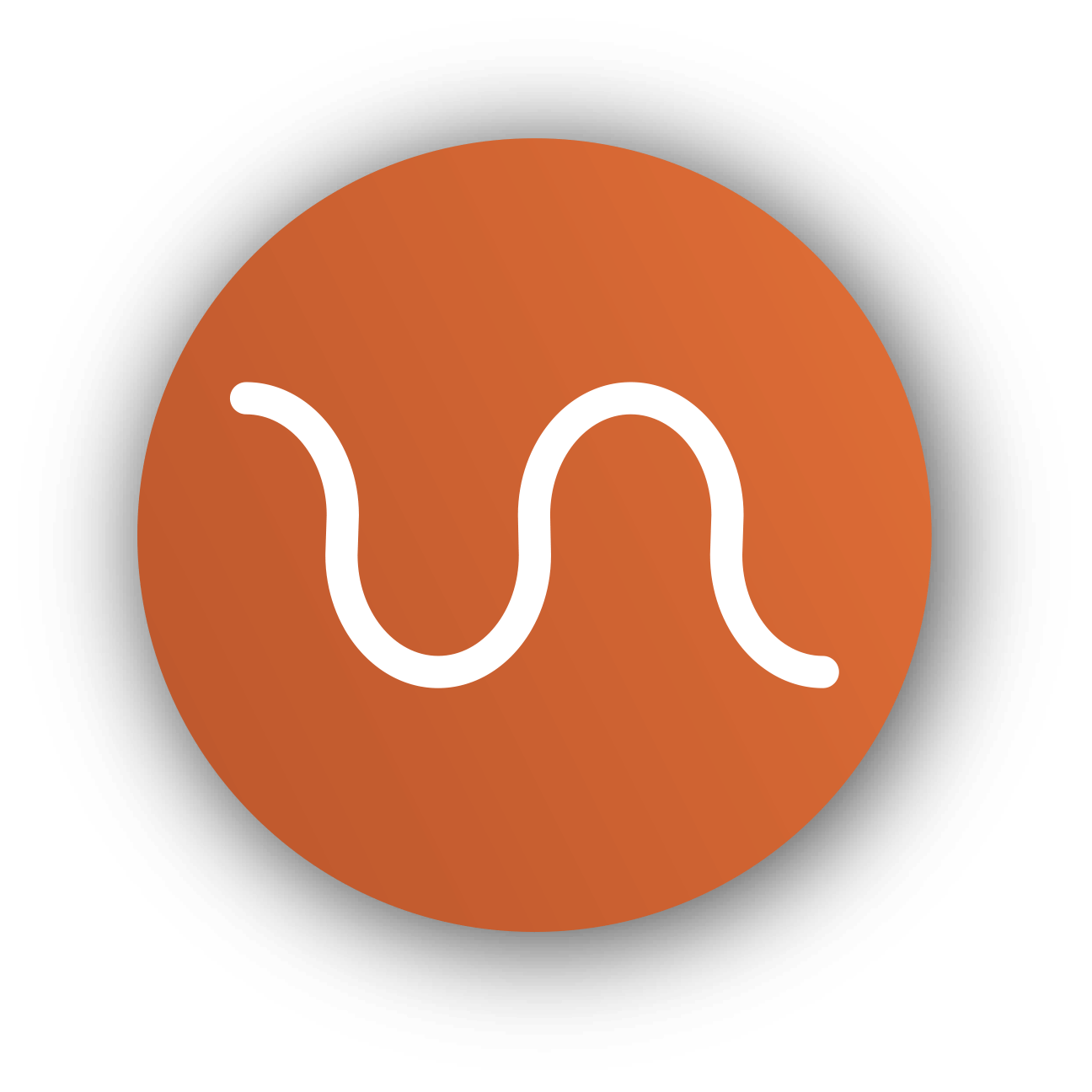 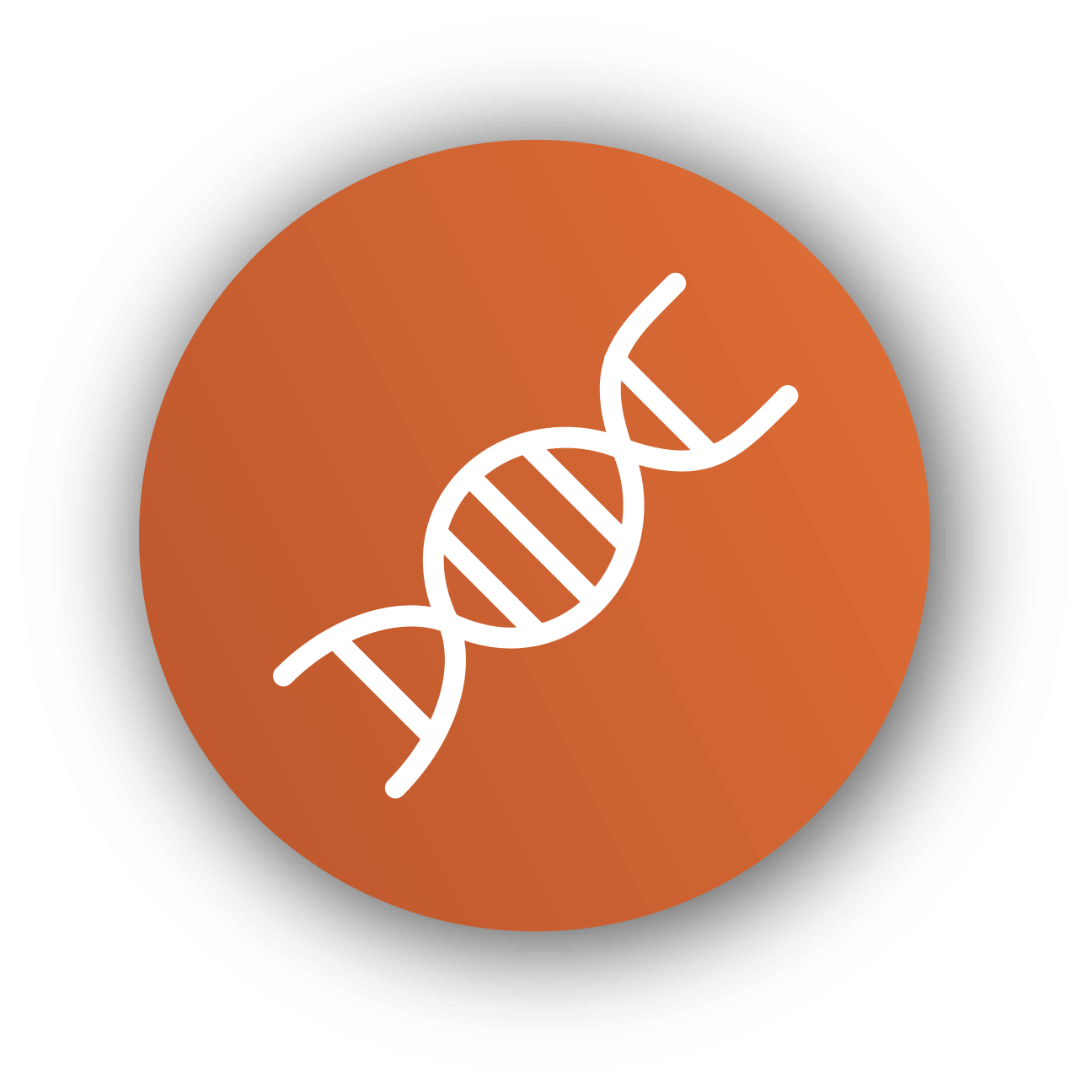 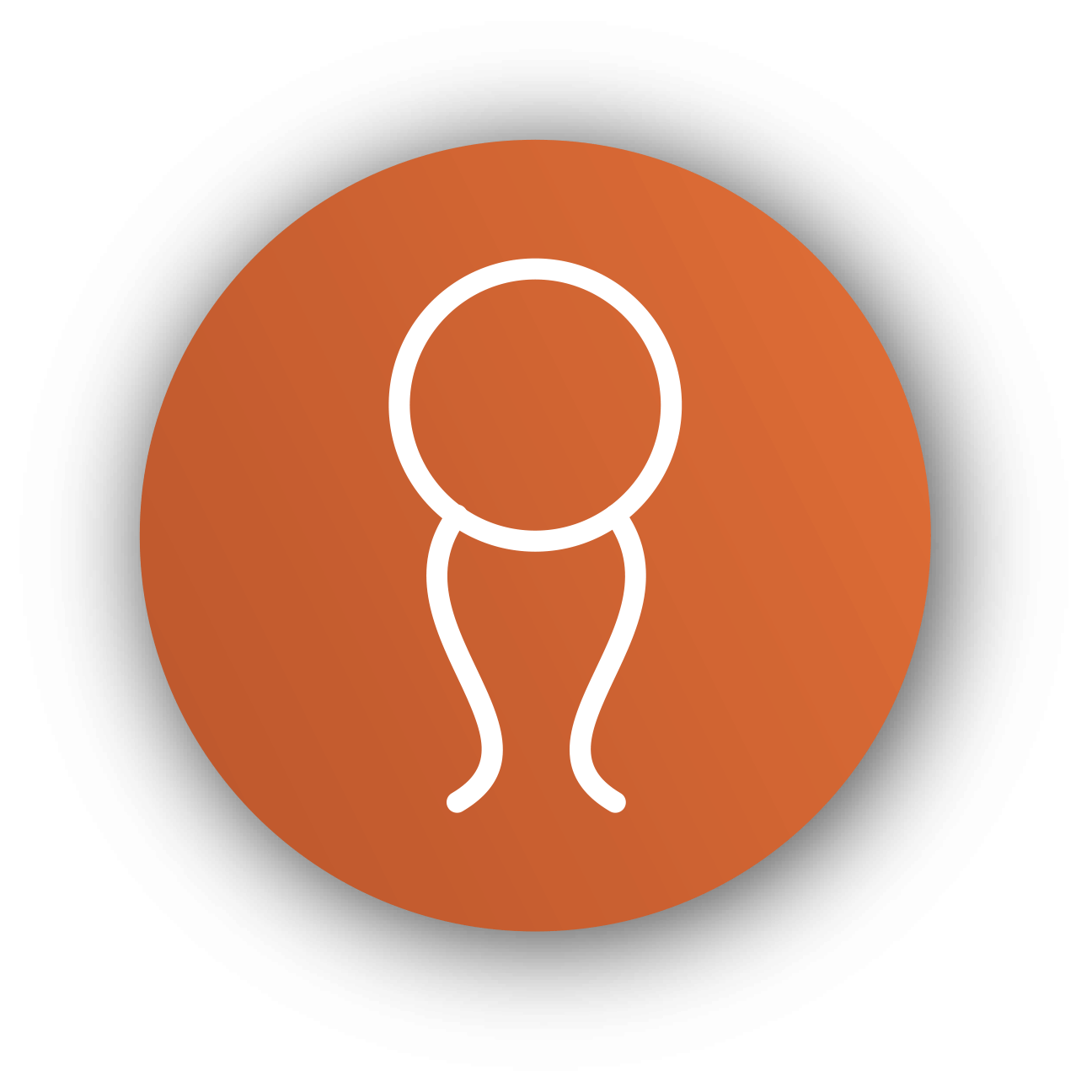 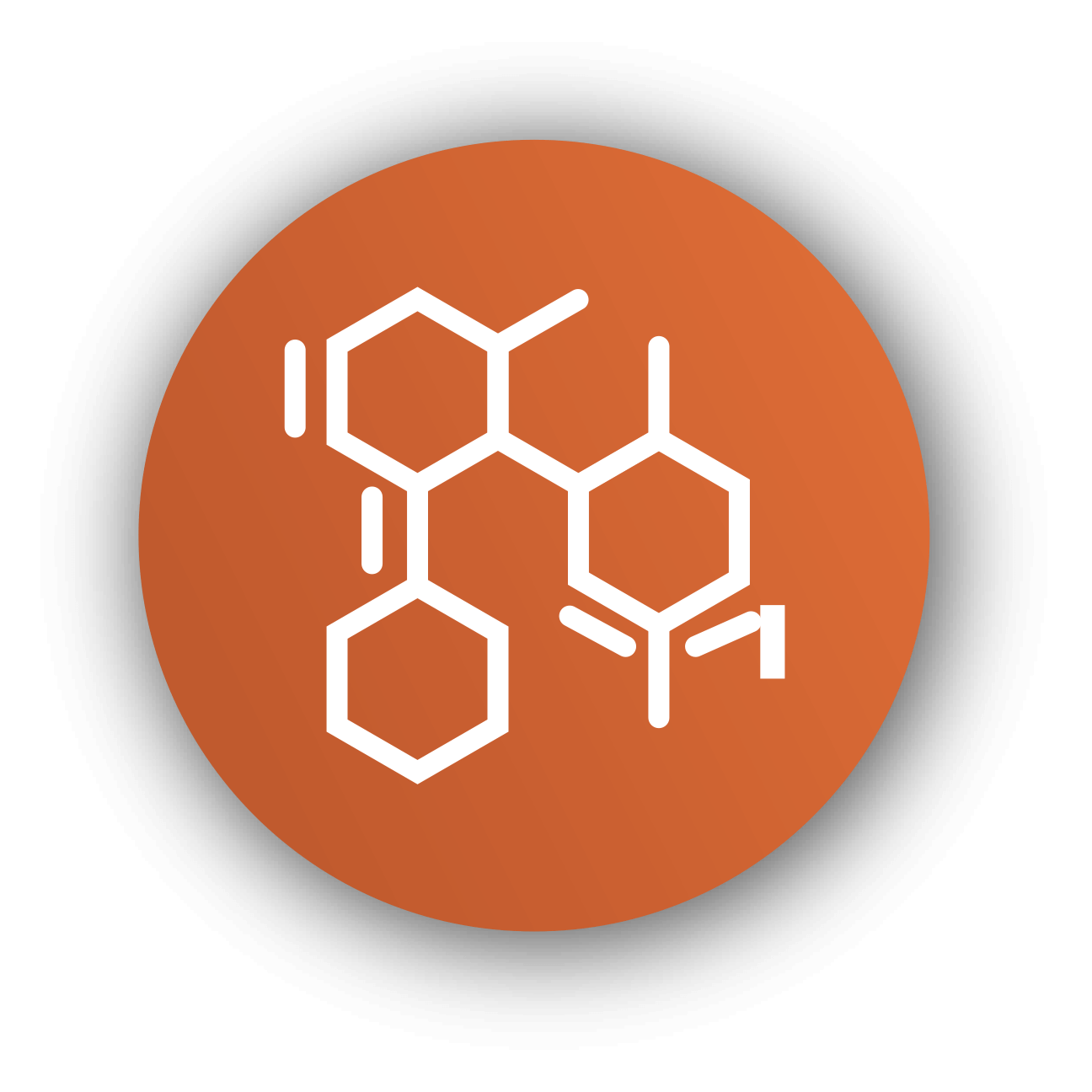 Find below some examples of drugs that have been encapsulated in PLGA nanoparticles with their specific applications.

HOW DO PLGA NANOPARTICLES PROVIDE A WAY OF TARGETING DRUGS TO A SPECIFIC TISSUE?

The delivery in specific tissues with PLGA nanoparticles can be tuned using surface functionalization, which is the combination of coatings and targeting ligands.

The most common coatings are PEG and PEI as mentioned before, but also chitosan, hyaluronic acid and human serum albumin are other hydrophilic alternatives to increase the circulation time and reduce the degradation of PLGA. 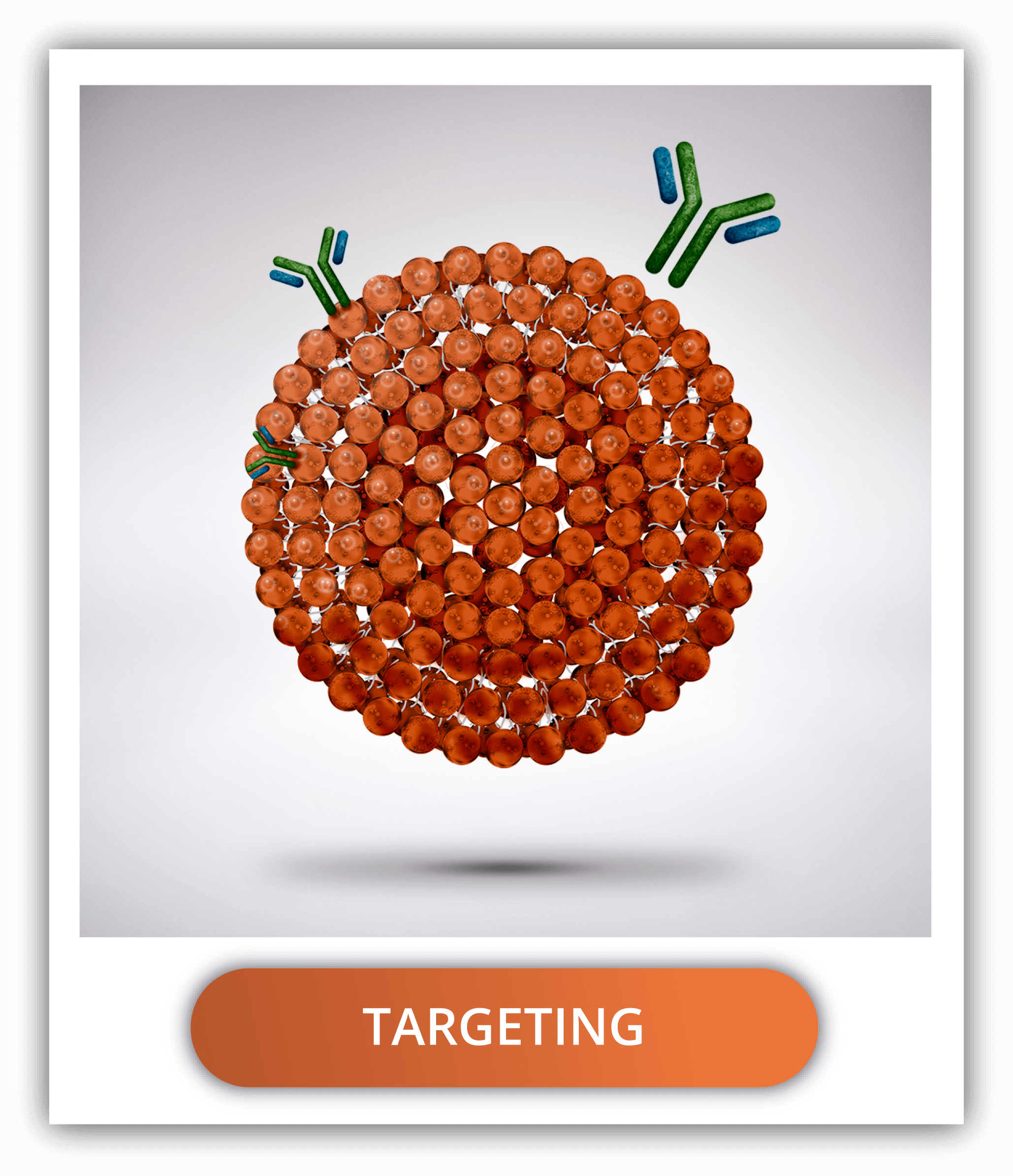 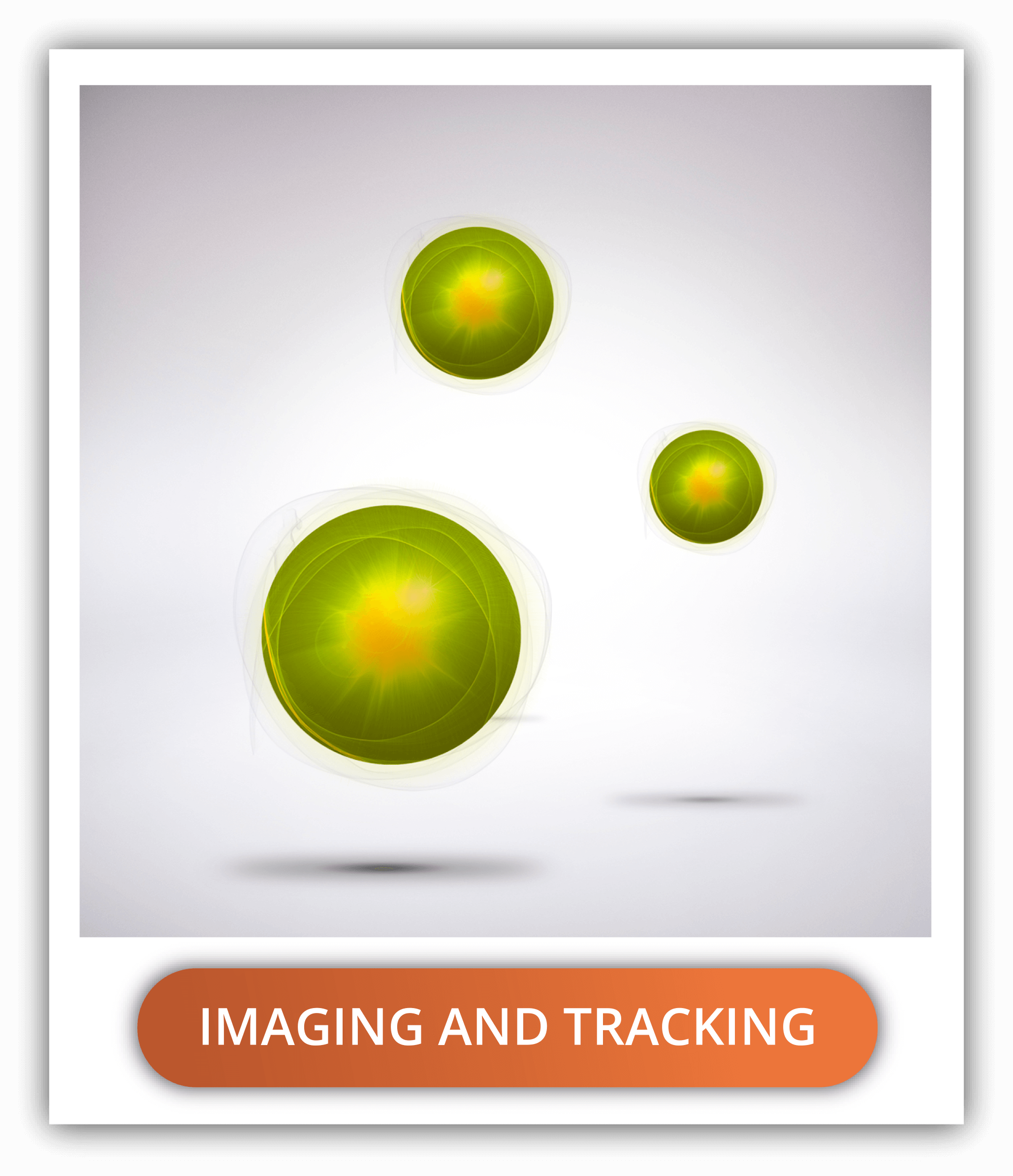 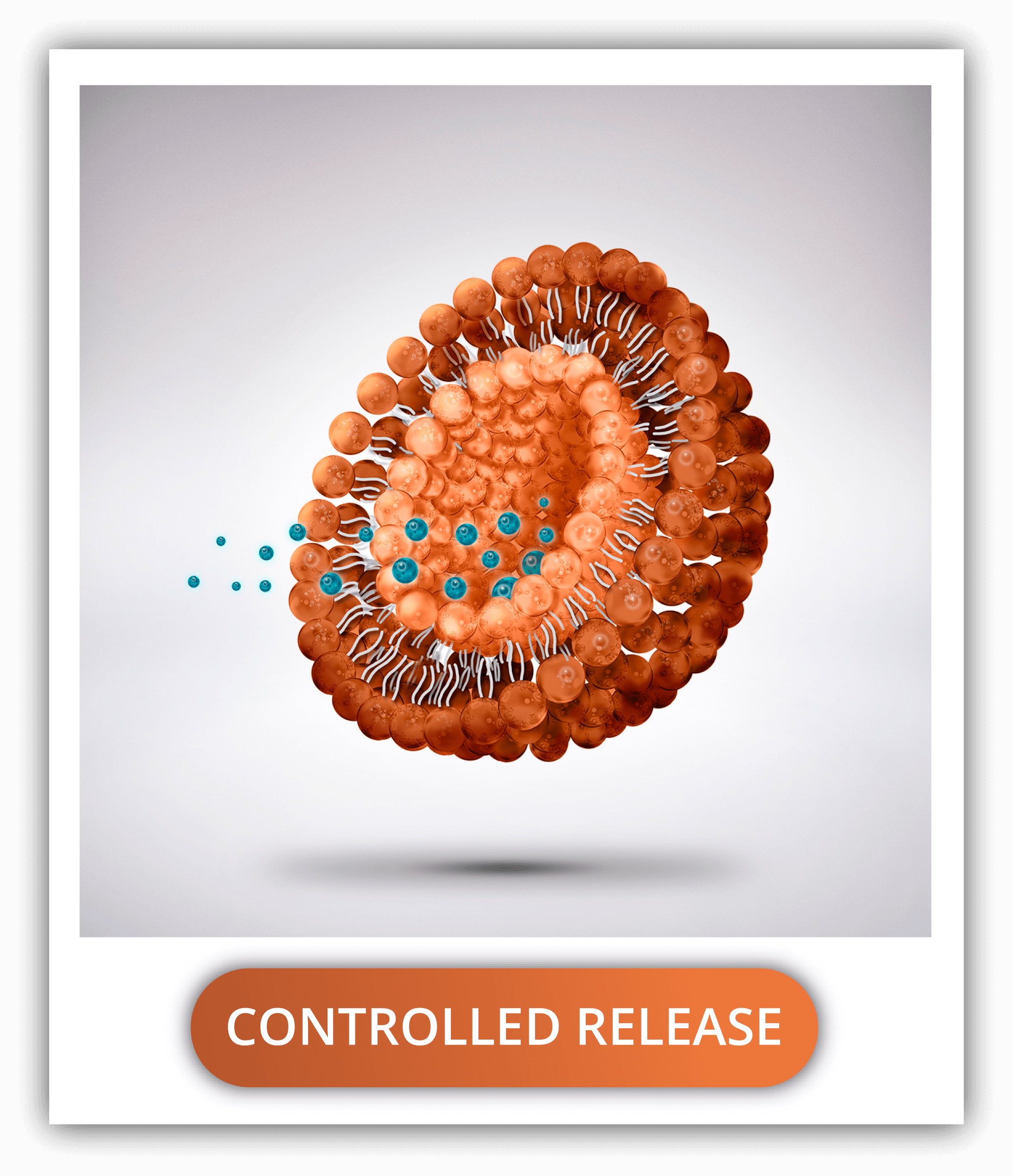 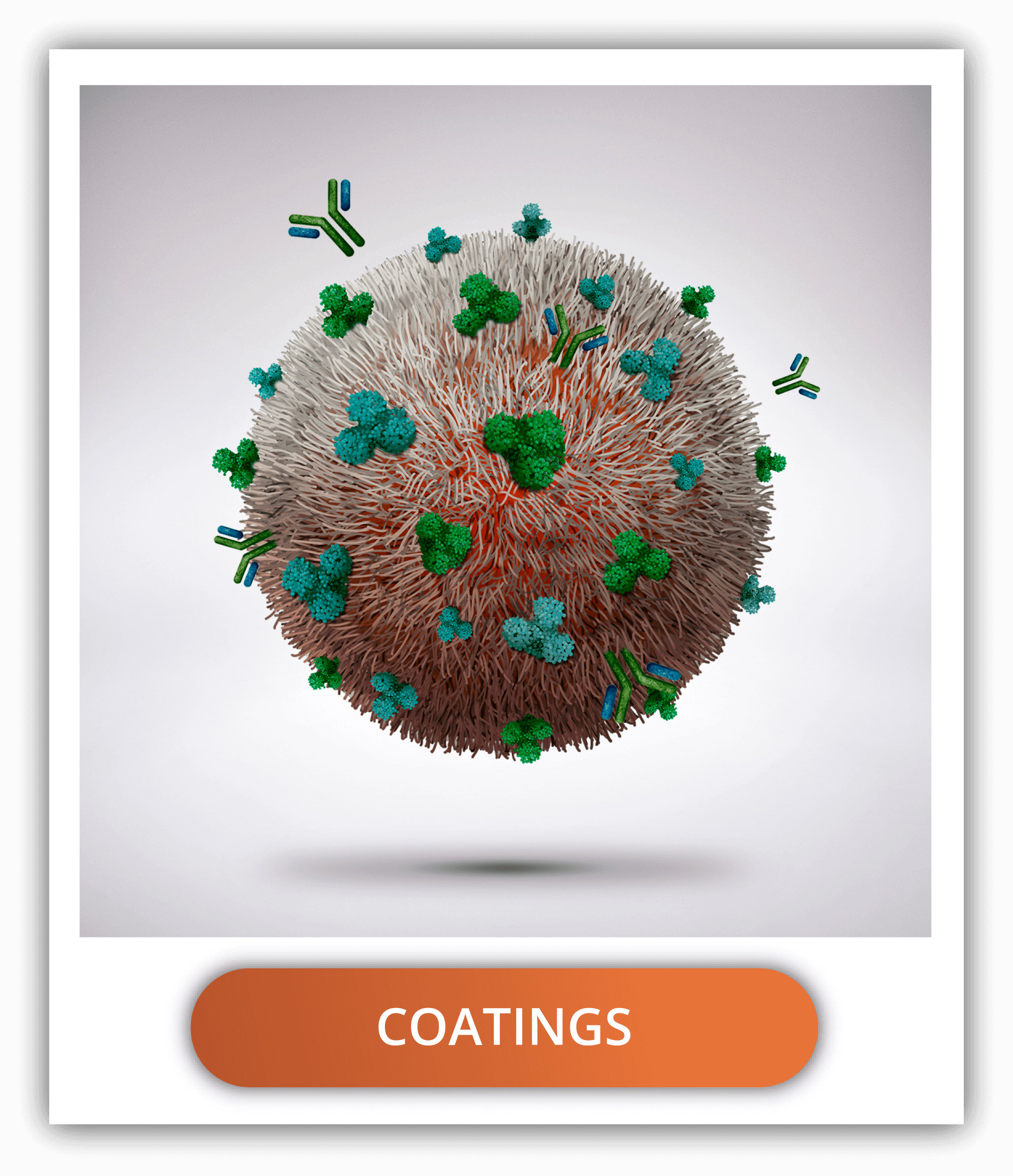 HOW CAN PLGA NANOPARTICLES CONTROL THE RELEASE RATE OF A DRUG?

PLGA degradation creates channels through which the drug escapes and it’s released into its surroundings. Fortunately, this speed of degradation depends greatly on the nanoparticle physical properties and composition as well as the production methods.

Some factors are the ratio of lactic acid to glycolic acid (determining the hydrophobicity and molecular weight), the size (bigger nanoparticles degrade faster, and some diameters are greatly cleared up by the RES cells or the kidneys), the monomeric sequence (random being degraded faster), termination sequence (uncapped and acid capped faster degradation compared to ester capped), media pH (acidic medium faster degradation), temperature (directly proportional) and surface area; among many.

By considering all the settings in the design and conducting an extensive characterization of the nanoparticles, the delivery rate of the drug can be easily controlled.

Do you have a drug delivery project compatible with plga nanoparticles? Get in contact with us and tell us a little bit about your project. We will assess you and prepare a PLGA nanoparticle design that ensures your success.